Why is padel so much fun?

This new tennis variant is conquering the world and also the Netherlands. It looks like a mix of squash and tennis. It is already one of the fastest growing sports in the world and Spain is leading the way! In Spain padel is the second sport after football.
If you come to Spain, then you have probably seen the padel courts. Its size is a third of a tennis court and the walls are glass. The ball can bounce off any wall but can only hit the ground once before being returned. Similar to tennis.
The padel racket is short, without wire but with holes in the surface. You use a low compression tennis ball and you always serve underhand.

Padel is a sport that combines action with fun and social interaction. It’s a great sport for players of all ages and abilities because it’s both quick and easy to learn. Most players learn the basics within the first half hour of playing so they can quickly enjoy the game.

What are the rules of the game?

The ball can bounce off any wall but may only hit the ground once before being knocked back. When the ball bounces twice into the opponent’s court, a point is scored. The game is played with a short racket without strings and with an elastic surface with holes, and with a low-compression tennis ball. The service is underhand. Strokes are played before or after the ball bounces off the surrounding glass walls, adding a unique dimension to the sport over conventional tennis. 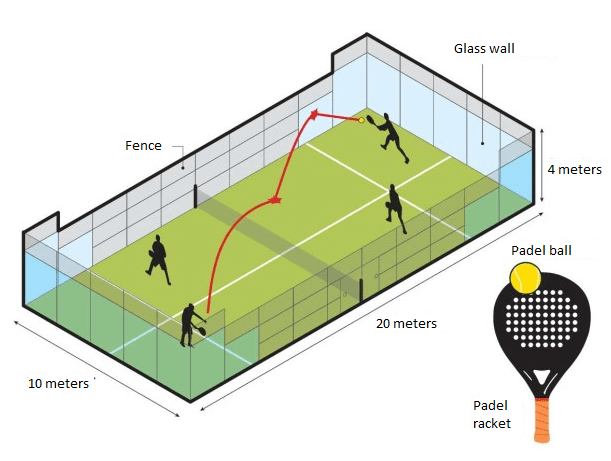 How is the scoring?

The scores and rules are similar to tennis, with the main difference being that the serve in padel is underhand and balls can be played from the glass walls in the same way as in squash. The rules allow the use of the back and sidewalls, resulting in longer rallies than a conventional tennis match.
The more extensive rules can be found here, as well as a youtube film with the explanation of the rules by the KNLTB.

How do I get rackets and balls?

Rackets can be rented for 2.50 euros each time at the Sportcafé Startbaan. The somewhat softer padel balls are also for sale at the Sports Café.
If you have a taste for padel, then of course you buy your padel racket yourself.

How to rent a padel court?

The reservations are opened two weeks in advance, which can be reached via this link. You pay online with Ideal.
Cancellation is possible, at least 24 hours in advance.

Is it possible to cancel in case of rain?

Padel can actually be played in all weather conditions. Water on the track is drained directly through the permeable foundation. Like football and fieldhockey you can play padel when it is raining. If you don’t like playing in the rain you can cancel the padel court 24 hours in advance.

Only in exceptional weather conditions (ice and snow for example) the courses can be declared unplayable, by the groundsman. Then a refund of the paid booking can be requested.

As an introduction for those who have never played padel, Park Startbaan offers introductory clinics. In an hour you learn the game and you get acquainted with some game forms. The rules of the game are also discussed.

Clinics are taught by an experienced padeller, Nicky Roeg. If you want to join a padelclinic, please contact Nicky Roeg at padel@parkstartbaan.nl

You can apply for a clinic per person and also per group of 4 people. Payment via the webshop.

If you want to continue in padel, it is advisable to take lessons. Price of the lessons on request. Please contact our entertrainer padel, Nicky Roeg can be reached atpadel@parkstartbaan.nl

We can go again!